The Gabriola Vegeteers will be hosting a vegan potluck on Wednesday, July 11 from 5:00 to 8:00 PM.

If you would like to attend, please email gabriola.vegeteers@gmail.com for the location.

Our guest blogger Sigrid Bjarnason is an animal advocate and vegan living on Gabriola Island. Here, she describes why she made these important life choices and how she and her fellow “Vegeteers” work on behalf of animals.

Read The knowledge of suffering was too much to bear alone

It was so powerful that the entire event was vegan! It normalized veganism for the people who attended. Because it was a music fest – not a vegfest – most people were music lovers – so just happened upon the food incidentally and found out that it tasted great. It was a small but very successful event – probably 500 people – but those 500 people were all faced with the idea that veganism was the norm, not a weird thing.

All the food trucks and booths served vegan food, there were compassion signs up in various places promising that we would not harm other animals, the musicians and crew were served vegan meals made by Robert – our favourite restaurant owner – throughout the weekend and we didn’t even hear one complaint about it.

Crew from one of our important local farms spent the weekend serving really healthy veg kabobs on rice, served in a cabbage leaf bowl, topped with kimchi and sauce and they were run off their feet with customers. The farmers aren’t vegan and they never would have thought of cooking that way without this opportunity. But it gives them a new perspective on the idea of vegan cooking. They run a produce box program on the island and they provide recipes to go with the produce – that are never vegan. I’ll be interested to see if they start to send some vegan recipes along with the produce in future…we’d be surprised if they don’t.

There was a great raw food demo each day by some funky young women who run a vegan place in Tofino called Earth Mama Love Kitchen Collective – and Vesanto Melina (the dietician who is co-author of Becoming Vegan: Brenda Davis and Vesanto Melina and various other plant-based books) gave a presentation each day and then she came and hung out at the Vegeteers booth with her books on display and talked to people about nutrition.
There were several compassion booths there – we had a Vegeteers booth of course, with many volunteers over the two days, there was a PETA (People for the Ethical Treatment of Animals) booth, RASTA Sanctuary had a booth.

We had so many people coming by our Vegeteers booth wanting to talk about changing their diet. It was very helpful that Vesanto was there as a knowledgeable dietician and could have conversations with people about B12, iron, legumes, GMO Foods, etc. She was lovely and I’m sure lots of those people will be putting the info they got from her to use.

We had a vegan gift basket at our booth that was worth about $200 dollars – mostly vegan food donated by our local grocery store Village Food Market – but also one of Vesanto’s cookbooks, a vegeteers “liberation is love” t-shirts, a $50 gift certificate from The Herbivore Clothing Company. Sixty-nine people entered the raffle, so at least that many people stopped at our booth long enough to have a chat and enter the draw. (We spoke to more people but some of the chatters didn’t enter because they were leaving before the draw, etc.)

Thank you to Trish, Alina & Sigrid for documenting the recent trip to R.A.S.T.A 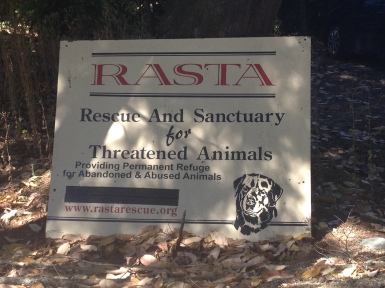 The Vegeteers tour of R.A.S.T.A Farm Sanctuary was loads of fun and educational as well. Such a wonderful opportunity to get up close and personal with some animals that we may not normally have the opportunity to see. They are very respectful of the animals. The founder, Lucie let everyone know that it is not a petting zoo and that contact will be at the behest of the animals. Lucie also includes a mandatory presentation on factory farming. Coming from Alberta, they have seen some horrors such as terrified horses being auctioned off by the pound. Lucie and her partner were once parked on the side of a highway filming a slaughterhouse when an employee came out with a shotgun and threatened them. They are dedicated, passionate and serious about taking the very best care of the animals in their charge. 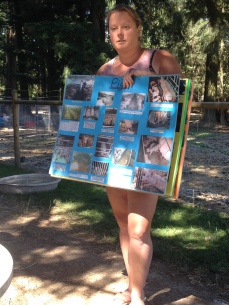 Lucie’s presentation was effective. If you were not aware of the inherent cruelty in factory farming you would certainly have your eyes opened. 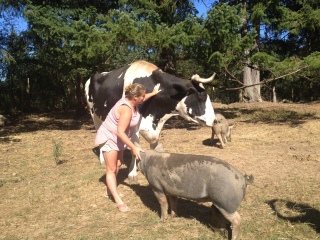 Lucie provided background on the animals and their rescues. It was heartwarming to see the animals so well loved and cared for.

Penny the Piglet immediately captured everyone’s hearts. She managed to escape off of a truck bound for a slaughterhouse in Saskatchewan. She bravely jumped off at 100 km/hr and was rescued by a man who saw her jump and roll into a ditch. Sometimes it takes a village and that was the case with Penny who had many fans help along the way until she reached her new Mama, Lucie and her fantastic new home at R.A.S.T.A where she will undoubtedly live happily ever after. 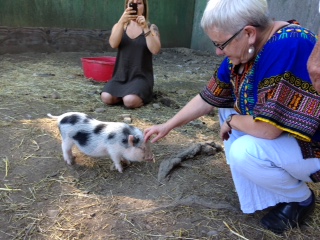 Penny-Anne enjoys a close-up with a Piglet 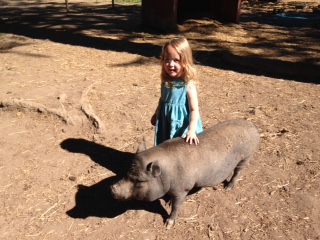 Sage and a Pot Bellied friend 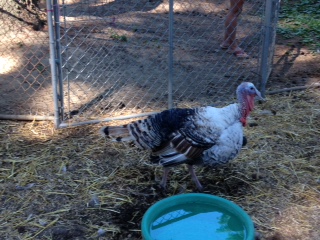 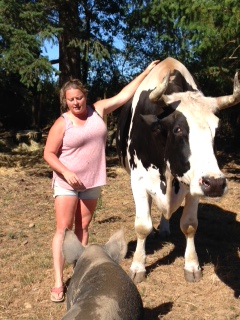 Lucie with Theodore who was rescued off of the floor where he was left to die, not even deemed worthy of becoming veal. Theodore is very gentle and a big boy. If he continues growing, he may end up in the Guinness Book of World Records! 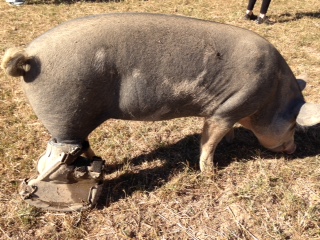 Pirate with his $2,000 prosthetic. Pirate weighs 300 lbs and will grow to be 700lbs. Breeding and use of hormones has caused Pigs to have problems supporting their weight. 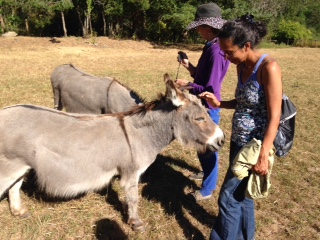 Susan and Lisa giving love to miniature donkeys Tango and Romeo. These two came from a petting zoo and were rescued in the nick of time. They were about to be weighed and sold as meat. 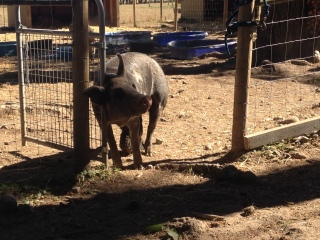 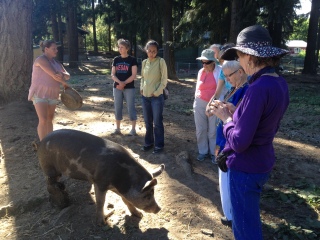 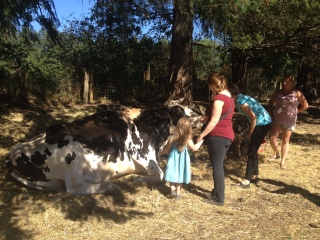 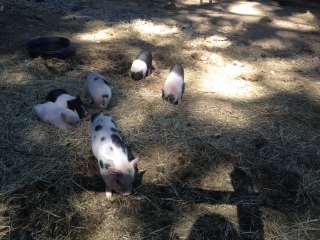 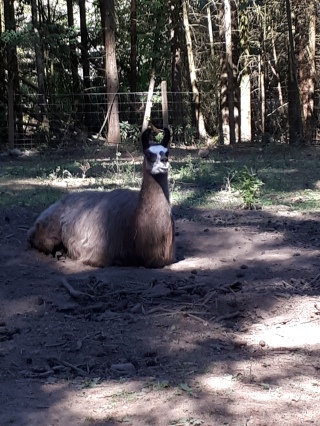 One of two very senior Llamas 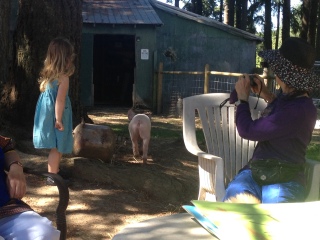 Show your support for the Vegeteers and animal rights with our new t-shirts! Designed by local artist Sheila Norgate, these t-shirts are available for $15. Email gabriola.vegeteers@gmail.com to purchase or purchase at any event where the Vegeteers are present (like this weekend’s Music Festival!). 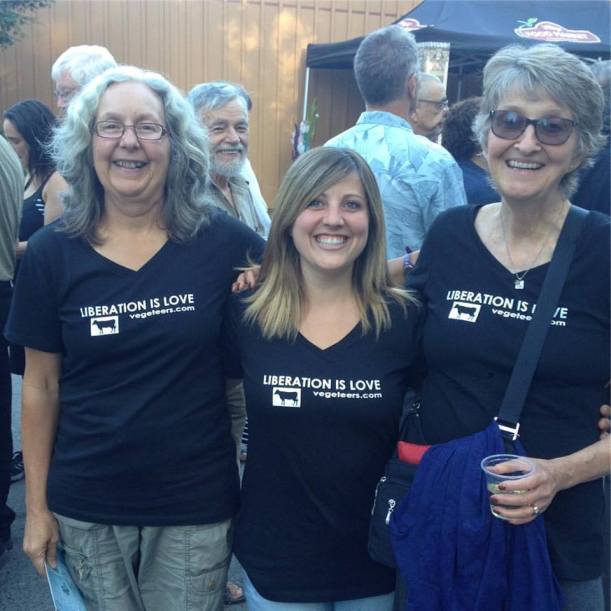