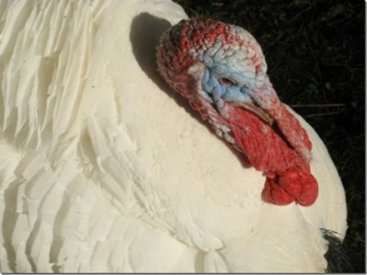 I have two problems with this time of year: not only does all the frantic shopping give me a headache, but I live with an adorable turkey named Ernie who depends on my kindness.

The shopping is one thing. One recent Christmas Eve found me at a jam-packed Wal-Mart at 3 o’clock in the afternoon. Did you get that? Wal-Mart. Christmas Eve. Three in the afternoon! There I was, sifting manically through the DVD bargain bin trying to find a copy of a movie that Santa had promised my treasured grandson. (You’ll be happy to know I did find the DVD, and Santa learned his lesson: promises, yes, but nothing so specific.)

The turkey issue is much more stressful. Ernie, our resident turkey, is a beautiful and eccentric bird who was diverted from an Easter dinner plate and eventually found his way to our place. He’s a gentle creature – except at dusk when my long-suffering husband tries to close the coop door after coaxing Ernie in there to keep him safe from predators. Ernie pecks his hand ferociously every time. Ernie, like the wild turkeys we see on the island, would rather perch on a tree branch or power line in the great outdoors than bed down in the coop. Unfortunately, he was bred for bulk. Ernie is too fat to fly.

Ernie and his brother Bert were for sale on Kijiji a few years ago and some kind people bought them as pets, not food. Apparently, Ernie and Bert were happy companions as youngsters, but once their adult hormones kicked in they fought relentlessly. They had to be separated.

Given his gentle serenity around our place, I would have a hard time believing that story of continuous conflict, except that Ernie becomes frantic when he sees his own reflection in the shiny car bumper on my husband’s red ’73 Mercedes. Just one glance sets Ernie squealing and banging on the chrome with his formidable beak until we shepherd him away from the source of his angst. He must think Bert is back!

At any rate, Ernie usually wanders around the property following people or chickens and gobbling enthusiastically when the mood strikes him. His face, snood, and wattle shift from deep red to cobalt blue and back again depending on his emotions. He puffs up and proudly displays his full-feathered girth often, occasionally huffing dramatically when he feels particularly special. When his excitement reaches fever pitch he starts vibrating and shifting from foot to foot. It’s like he’s dancing to a Stompin’ Tom Connors tune that the rest of us can’t hear. He truly is a marvellous creature.

This morning I found Ernie perched precariously on a tiny ledge in our bathroom. His snood, which usually dangles well below his beak, was tightly packed on his forehead in surprise. No doubt our resident terrier, Roscoe the rascal, had something to do with it.

Ernie had enough class to look like he planned to be there, but graciously allowed me to pick him up and put him outside without a fuss.

As with every year at this time, I’ve been seeing gleeful cartoon turkeys plastered here and there, looking for all the world like they’d happily climb right onto my dinner plate.

Really? I obviously can’t eat Ernie or any of his friends or relatives for Christmas dinner. But these days, with all the new veggie cookbooks and websites, it’s easy to find terrific alternatives to turkey. As long as I can leave Wal-Mart off the shopping list – and animals off the menu – Ernie and I can both enjoy peace in our world at this time of year.

Find lots of recipes and information at vegeteers.com (And while you’re at it, take a look at the “12 Reasons to Respect Turkeys…” posting).